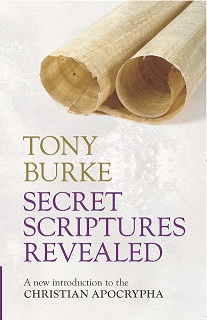 The Christian Apocrypha burst into the public consciousness in 2003, following the publication of The Da Vinci Code by Dan Brown. Interest in the wide assortment of texts not included in the Bible has remained strong ever since. Although much has been written and said on the subject, misunderstandings still abound.

Tony Burke’s Secret Scriptures Revealed dismantles the many myths and misconceptions about the Christian Apocrypha and straightforwardly answers common questions like these:

The book describes and explains numerous fascinating apocryphal stories, including many that are not well known. Instead of dismissing or smearing the Christian Apocrypha, Burke shows how these texts can help us better understand early Christian communities and the canonical Bible.

“A superb introduction to a broad range of early Christian non-canonical texts. . . . [Burke] writes with the skill of an expert and the communicative ability of a great teacher.” ~ Catholic Biblical Quarterly

“Tony Burke has long established himself as a master of the Christian apocrypha, writings that did not make it into the New Testament. With Secret Scriptures Revealed he has made his massive knowledge of the field available to a broad general audience in a readable, informed, and enjoyable overview that will be long cherished by both beginners and devotees.” ~ Bart D. Ehrman, University of North Carolina at Chapel Hill

“A fabulous new resource for undergraduates and nonspecialist readers. Written in accessible language with helpful references to modern reuses of Christian apocrypha such as Dan Brown’s novel The Da Vinci Code, this book delivers what its title promises — a state-of-the-art introduction to some of Christianity’s most delightful, surprising, and even shocking works of ancient literature, which a wide audience of early Christians knew and enjoyed but modern readers rarely encounter.” ~ Nicola Denzey Lewis, Brown University

“This excellent introduction to Christian apocryphal literature will be of use not only to scholars and students of the Bible and Christianity but to the general public as well. In particular, Burke is to be thanked for his convincing response to some unfortunate misrepresentations of early Christian apocrypha that have recently appeared in popular fiction and apologetic literature. Anyone looking for a historically reliable description of Christian apocrypha and their significance would do well to read this book.” ~ Stephen J. Shoemaker, University of Oregon

“An immensely valuable resource. . . . There are only a few other introductions to this literature currently available, all of which are either limited in the genres of texts they consider or overly technical. Burke’s book does not shy away from introducing students to the complexities of manuscripts and languages of transmission, but he does clearly explain why these topics are so essential for fully appreciating the challenges of studying this literature.” ~ Brent Landau, University of Texas at Austin

“An informative survey of an extensive corpus of Christian apocryphal texts. Burke’s prose, written in an engaging and comprehensible style, is particularly accessible to beginning students, but specialists in other aspects of the historical study of religion will also benefit from his succinct description of the field.” ~ Charles W. Hedrick Sr., Missouri State University

“In this fine work, Burke offers a wonderfully readable and accessible introduction to the Christian Apocrypha. . . . This excellent volume is a welcome addition to the existing literature, and is highly recommended.” ~ Publishers Weekly

“This excellent, accessible introduction to early Christian Apocryphal literature should appeal to a broad audience. Drawing on his extensive knowledge of the subject, Burke does a superb job of presenting the noncanonical gospels, letters, apocalypses, and the like in an approachable style. For those who are unfamiliar with this fascinating literary corpus from the Christian tradition and would like to know more, this study marks an excellent place to start.” ~ Choice

“For anyone unfamiliar with apocryphal writings, Burke’s work provides a thorough summary of the scholarship behind it. It would a good resource for any lay person desiring to know more about various non-canonical texts.” ~ Catholic Library World

“Instead of dismissing the Christian Apocrypha, the author shows how these ancient texts can contribute to a better understanding of early Christian communities and the canonical Bible.” ~ Ecumenism

“One of the few books to introduce the Christian Apocrypha to the general reader without engaging in sensational claims. . . . This short introduction provides the background the average reader needs to read this diverse literature properly.” ~ Reading Acts

“A somewhat brief but informative primer on the Christian Apocrypha that defines terms clearly, gives a good description of these writings, and tells their stories in an interesting narrative fashion.” ~ Southwestern Journal of Theology

“A readable, engaging introduction to noncanonical texts and debates about them. Nonspecialists are gently introduced to significant scholarly issues, and texts are described in such intriguing ways that readers will surely be motivated to follow the helpful recommendations for further reading and peruse texts for themselves. . . . Provides a fascinating window into the intriguing world of noncanonical texts for a general audience.” ~ Review of Biblical Literature