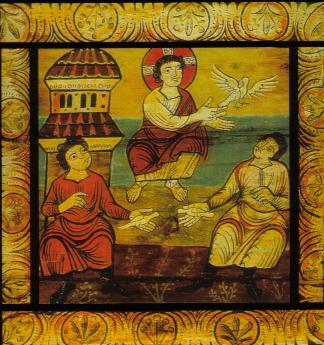 The Infancy Gospel of Thomas (IGT) is a second-century collection of tales of the young Jesus from the ages of five to twelve. IGT is a non-canonical (some would say “apocryphal”) text—i.e., it was not considered acceptable for inclusion in the official canon of Christian scripture. One look at IGT’s contents and the reason for exclusion seems clear. In one story, a child disturbs the young Jesus at play, so Jesus causes the boy to whither away (chs. 2-3). When another boy bumps into him in the marketplace, Jesus utters a curse (“You won’t continue your journey”) and the boy falls dead (ch. 4). Jesus later embarrasses a teacher with his superior knowledge (ch. 6), and kills a second teacher for reprimanding him (ch. 14). Despite its troublesome contents, IGT was transmitted heavily over the centuries. There are versions of the text extant in Greek, Latin, Syriac, Slavonic, Georgian, Ethiopic, and Arabic.

This web page is dedicated largely to providing up-to-date English translations of the available witnesses to the text. Most readers of IGT are familiar with the longer 19-chapter form made popular by Constantin von Tischendorf in 1856. There has been much progress over the intervening decades since Tischendorf’s edition. The texts presented here represent the latest advances in the effort to sort through the evidence.

3. Other Texts and Translations

4. Links to Other Web Sites on The Infancy Gospel of Thomas