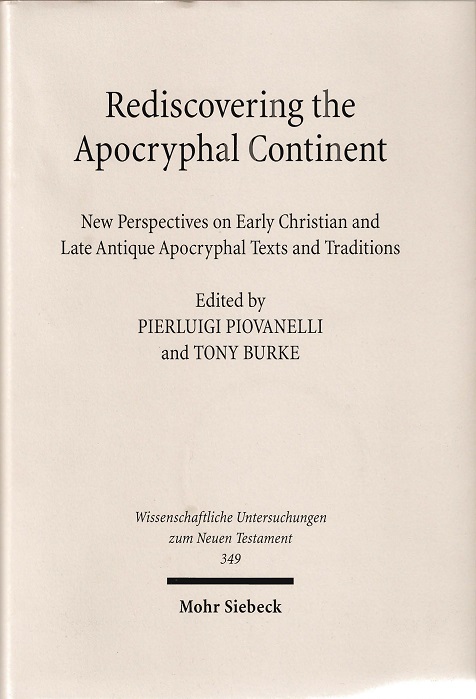 This volume collects the contributions of a group of North American scholars who started rethinking, in 2004, the traditional category of New Testament Apocrypha, largely dominated by theological concerns, according to the new perspectives of a greater continuity not only between Second Temple Jewish and early Christian scriptural productions, but also between early Christian and late antique apocryphal literatures. This is the result of the confluence of two, so far, alternative approaches: on the one hand, the deconstruction of the customary categories, inherited from ancient heresiology, of “Jewish Christianity” and “Gnosticism,” and on the other hand, the new awareness that the production of new apocryphal texts did not cease at the end of the third century but continued well into late antiquity and beyond. These papers bring together for the first time the typically North American need to reconsider “The Ways That Never Parted” and other artificially drawn “Border Lines” with the more European attention paid to the phenomenon of apocryphicity in the long term. In the twenty essays published here, different facets of this apocryphal continent are newly explored, from the Christian appropriation of Jewish stories and literary genres, with a special emphasis on the case of the late antique Pseudo-Clementines and their hypothetical Jewish Christian source, to the complex and controversial situation of the narrative roles attributed to such figures as Judas Iscariot, Mary of Magdala, Mary the mother of Jesus, or Peter. These new insights are particularly relevant not only for the history of the first Jesus movement but also, and especially, for gaining a better understanding of the ways Judaism and Christianity evolved initially together, then side by side, according to a process of differentiation that took more time than previously thought.

“The essays provide an excellent, varied overview of the importance of debates which challenge long-held assumptions and category constructions surrounding ancient texts, and the danger of assuming direct dependence of apocryphal texts found in late-antique manuscripts on early (or uncertain) traditions.” ~ Kimberly Fowler,  Journal for the Study of the New Testament 38.5 (2016): 121-22.

“Overall this is an impressive collection, providing valuable material for all those working in this general area both in relation to broader methodological issues as well as specialist studies on individual texts and traditions.” ~ Christopher Tuckett, Journal of Theological Studies 67 (2016): 261–63.

I. Introduction
Pierluigi Piovanelli: The Christian Apocryphal Texts at the Society of Biblical Literature International Meetings (2004–2006) and the Ottawa International Workshop (2006): Retrospects and Prospects

III. From Early Christian Texts to Late Antique Apocryphal Literature
Louis Painchaud: With Regard to the (Re)Discovery of the Gospel of Judas – Minna Heimola: Christians and Jews in the Gospel of Philip – Theodore de Bruyn: Christian Apocryphal and Canonical Narratives in Greek Amulets and Formularies in Late Antiquity – Stephen J. Shoemaker: Mary in Early Christian Apocrypha: Virgin Territory – Pierluigi Piovanelli: Why Mary and Peter? From the Early Christian Gospel of Mary to the Late Antique Apocryphal Acts of the Apostles – Peter W. Dunn: Luke’s Acts or the Acts of Paul: Which Looks More Like a Second-Century Text? – Cornelia Horn: Depictions of Children and Young People as Literary Motifs in Canonical and Apocryphal Acts – Vahan Hovhanessian: The Repose of the Blessed John in the Armenian Bible: Deconstructing the Acts of John – Timothy Beech: Unraveling the Complexity of the Oracula Sibyllina: The Value of a Socio-Rhetorical Approach in the Study of the Sibylline Oracles – Michael Kaler: Gnostic Irony and the Adaptation of the Apocalyptic Genre – Timothy Pettipiece: The Manichaean Reception of Apocryphal Traditions: The Case of the “Five Limbs”