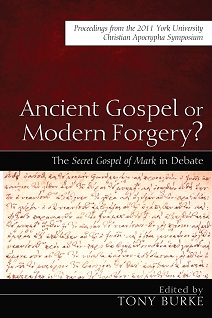 In 1958, American historian of religion Morton Smith made an astounding discovery in the Mar Saba monastery in Jerusalem. Copied into the back of a seventeenth-century book was a lost letter attributed to Clement of Alexandria (ca. 150-215 CE) that contained excerpts from a longer version of the Gospel of Mark written by Mark himself and circulating in Alexandria, Egypt. More than fifty years after its discovery, the origins of this Secret Gospel of Mark remain contentious. Some consider it an authentic witness to an early form of Mark, perhaps even predating canonical Mark. Some claim it is a medieval or premodern forgery created by a monastic scribe. And others argue it is a forgery created by Morton Smith himself. All these positions are addressed in the papers contained in this volume. Nine North American scholars, internationally recognized for their contributions to the study of Secret Mark, met at York University in Toronto, Canada, in April 2011 to examine recent developments in scholarship on the gospel and the letter in which it is found. Their results represent a substantial step forward in determining the origins of this mysterious and controversial text.

“In this brilliant and incisive collection of essays one finds both clarity and intellectual rigor. Not all the contributors ‘sing from the same hymn sheet.’ However, this diversity reveals how a highly contested topic can be approached in an engaging and respectful manner. Everyone who reads this book will be enriched, both by consideration of its contents and through appreciation of the measured tone with which this important debate is conducted. This is a first-rate and vital treatment of the topic.” ~ Paul Foster, School of Divinity, University of Edinburgh

“The debate over the Secret Gospel of Mark rages on. Did Morton Smith discover this text, or did he forge it? This terrific collection of essays presents leading voices from both sides of the controversy, stating their views, marshaling their evidence, and allowing readers to pass their own verdicts.” ~ Bart D. Ehrman, University of North Carolina at Chapel Hill

“Ancient Gospel or Modern Forgery? brings together most of the key supporters and detractors of the authenticity of the Secret Gospel of Mark in a balanced, probing, and illuminating book. . . . Although this book, carefully crafted by Burke, cannot be said to have brought closure on the issue, it has laid to rest many of the specious and illogical claims that have littered the discussion until now. We can only hope that the ground has now been cleared for a more balanced and scientific assessment of the Mar Saba manuscript.” ~ John S. Kloppenborg, University of Toronto